In the age of robotics, your teams will be creating software with no blueprint to bounce off. You must come up with design patterns that have never before existed, and the features these robots require are complex. Users will require dashboards that display everything from robot navigation, robot health, to data visualization - with the scale to support thousands of robots.

A UX-led approach to building software is critical. If you’re selling a state-of-the-art cleaning robot for example, packaging it with a software platform that is UX-led enhances the product experience. You can have the best hardware in the world but will miss out to someone who has better overall user experience for both hardware and software.

According to a McKinsey report, “Design flourishes best in environments that encourage learning, testing, and iterating with users— practices that boost the odds of creating breakthrough products and services while simultaneously reducing the risk of big, costly misses.” The same report stated almost 60 percent of surveyed companies used prototypes only for internal product testing late in the development phase - missing out on the success experienced by those that share early prototypes with outsiders.

In speaking to the experts, here are 7 top tips for adopting a UX-led approach to robotics.

1. Be immersed in an industry.

A design-driven robotics team will have deep dived into the industry to thoroughly understand what the problems specific to that industry are, and what they are likely to be in future. For example, they might be designing UX that is capable of scaling their solution from a few robots now, to 10,000 robots later as the industry evolves. A software company that understands the industry they are designing for firsthand will have the competitive edge, and will be producing software far from generic.

2. Offer transparency over your product roadmap.

Build a roadmap that your customer's are aligned with (rather than heading in a different direction). This will ensure your product will evolve with the industry and customer, and keep offering new features users actually need.

3. Customers should be a part of the design process.

If the customer is kept close and involved from your initial design concept and iterating right through to developing and deployment, the product’s UX will deliver exactly what the user needs. For example, the founders of design platform Figma (launched in 2015), shadowed designers to realize their pain. Figma gave the incumbent software Sketch and Adobe XD a run for their money because it was big on real time collaboration - something designers had long been asking for (and was already mainstream with the likes of Google Docs).

4. Tailor your product to the customer’s use case.

You might offer codesign workshops around a customer’s use case. For example, this session might include persona development - gauging technical ability of users, what they’re trying to achieve, what would help them and what would make their lives easier. You’ll use these insights and others for coming up with tailored solutions, building features and interfaces, and - critically - seek feedback for design iterations.

5. Build superior UX and UI rather than just feature parity with your competition.

The execution of a feature matters as much as the feature itself: for example, two platforms may both offer a teleoperation feature, but one might involve a tortuous process to set up the robot and requires an engineer to use the platform; while a platform that is UX-led, lets a non-technical user get the robot up and running stress-free.

6. Yes, your UI does still matter.

Build a simple, intuitive user interface - using established design principles and practices. If the user interface feels familiar and consistent across a platform (elements like icons, colours, buttons, responsiveness etc.), it will guide the user through using the product without them having to think too much.

In building software, exposing APIs and providing SDKs makes it fast and easy for users to integrate with your product. Design and develop a product that is loved. 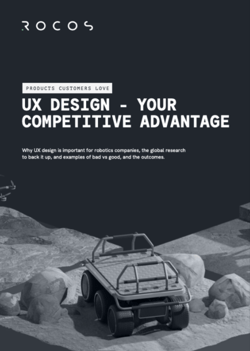 Get a copy of our eBook:

Learn why UX design is important for robotics companies, the global research to back it up, and examples of bad vs good.

Join our newsletter to stay up-to-date with the latest in robotics.